The Artist, better known as the INKER 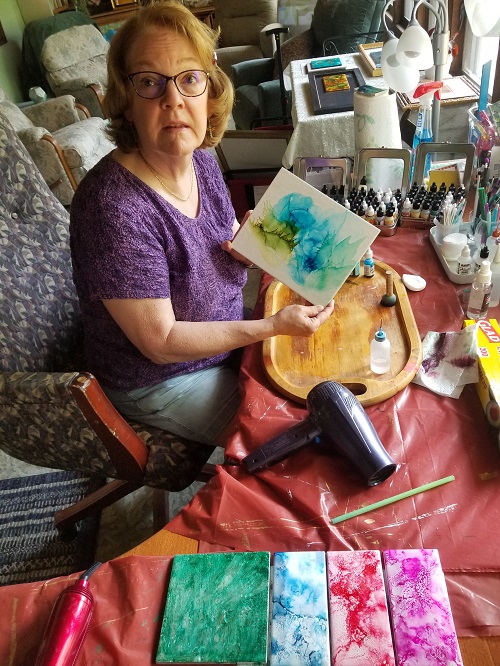 Lynne Robinson has been playing with color most all of her life, loving watercolor for the tints and hues and quilting for the designs that can be created. Dabbling in lots of different media has been enjoyable and a worthy pastime, but the vibrancy and brilliance of the colors of alcohol ink have captured her creative spirit and propelled her on her way to becoming a creator, designer – an artist.

Lynne has lived in the Newark/Elkton areas since 1969 when she arrived at the University of Delaware to become a research biologist. About 3 weeks into the first semester of Chemistry 101, she realized that biology labs and chemistry experiments were not what she was looking for. Graduating as an English major with an Education minor prepared her for teaching English, Poetry, and Creative Writing at William Penn High School for 23 years.

Part of the evolution of Lynne’s interest in art moved her to join TransArt and work with customers to choose prints and complimentary framing. Success in that field forced her into a decision – quit teaching and try selling art as a career or stay in education and have a safe income. Having a young daughter to raise helped Lynne decide that having a secure paycheck was of great value and the art business went by the wayside.

But after retiring early from education, time because less accounted for and more available – she began to dabble a little in lots of things – volunteering at Christiana Hospital as a Pastoral Assistant, teaching English as a Second Language, and reading to kids through Read Aloud Delaware.

And one day, one particular big red dog arrived on the scene and became a central focus in Lynne’s life. She and her husband Winston rescued Boo Radley, a 112 pound red golden retriever, and found him to be an incredibly intuitive therapy dog. This urged Lynne toward a totally new direction – doing more pet therapy with Boo, learning about the healing effects of the human/animal bond, and eventually founding PAWS for People, a non-profit organization focused on pet therapy and helping people in the community. PAWS for People was born in 2005 and for the next 12 years or so, Lynne devoted her time to building the fledgling non-profit into a well-respected, volunteer organization sporting over 600 trained and certified therapy teams visiting over 200 partnering sites through a variety of programs geared toward the different populations that need the support and love of a therapy pet.

Running PAWS for People has been one of the joys of Lynne’s life. Meeting so many diverse people, training PAWS therapy teams pet therapy’s best practices, and watching thousands of people benefit from the goodness and balance a good therapy visit have been intriguing and pretty much all-consuming.

Yet at one point about 3 years ago Lynne was paging through the Newark Arts Alliance flier and found a new art idea she hadn’t tried yet – alcohol inks. Not knowing what she was getting into, she took one course and fell in love with the promise of colors swirling together, making their own designs with magnificent tints and shading. That was the day Lynne decided it was time to play a bit.

She bought the starter pack of alcohol inks from the crafts store, went to the ReStore (Habitat for Humanity) for the purchase of some used tiles, and sat down to play. And neat designs kept arising from the inks. Friends and family encouraged her in her play, and after a while “you can only create so many tiles without having a place to put them.”

So Dragonfly’s Wings was born – out of the need to create, out of the desire to share the colors, and the joy of sitting down at her studio work table and choosing wild and wonderful colors that mix and meld into designs that can never be repeated.

So here we are – you and I – together, looking at patterns and splashes and shades I never would have imagined.

The magic is all in the inks, the fire and the peace – waiting to be released and settle on ta tile’s surface to bring beauty and freedom to the viewer.